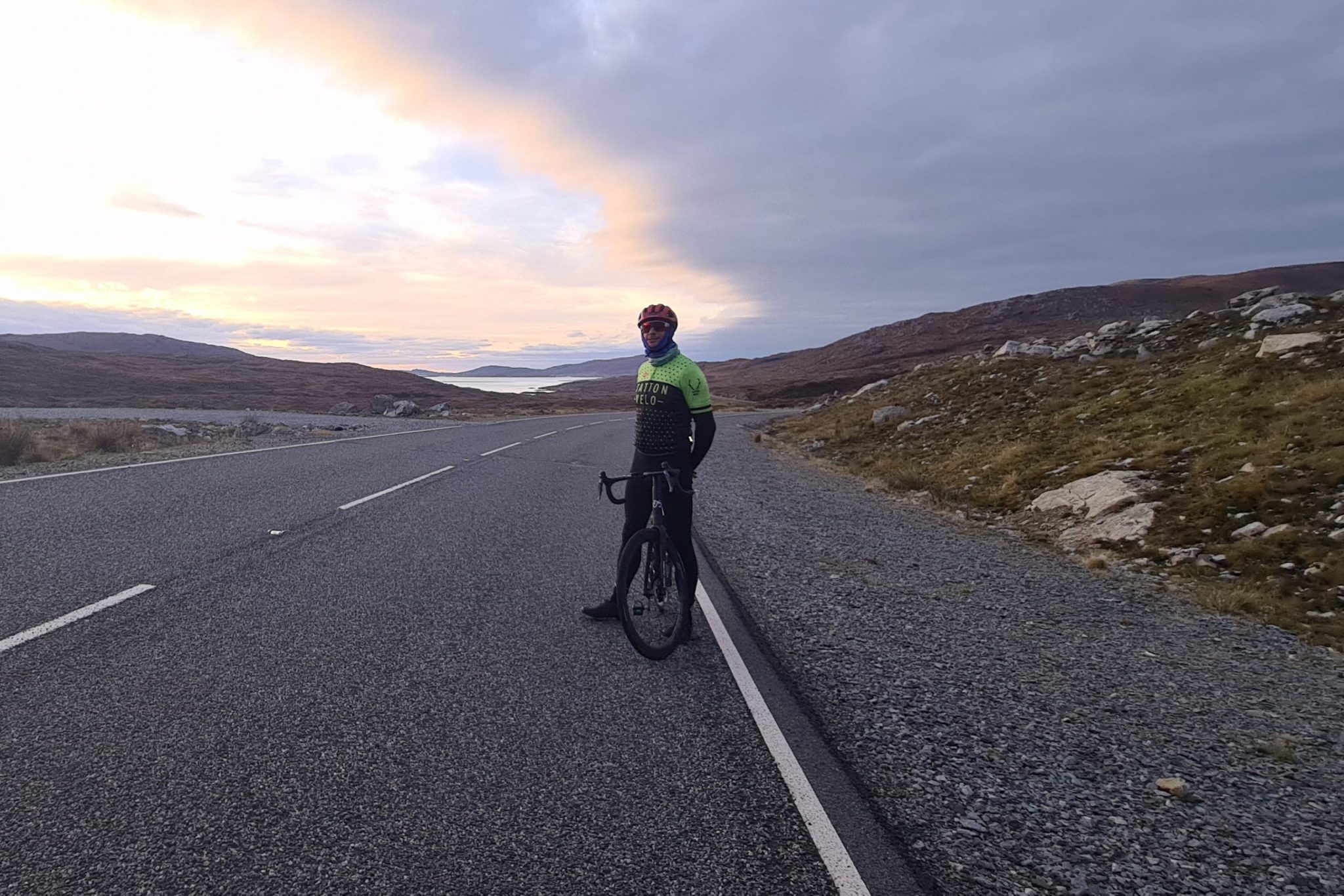 What is the Hebridean Way?

The Hebridean Way holds the honour as Britain’s remotest long-distance cycle route. For 184 miles (296 kilometres) it twists and turns across ten islands of the Outer Hebrides. It’s impossible to get lost; just keep following the signposts for National Cycle Network 780 (or just keep the sea on your left and head north!).

Six causeways and two ferry journeys connect the ten islands and help make this journey a true adventure! Generally, the route is pedalled from south to north as this avails the prevailing winds and makes the Butt of Lewis Lighthouse the dramatic finale. The Hebridean Way is a cycling adventure you won’t forget in a hurry!

Why Cycle the Hebridean Way?

Even the very biggest village along the Hebridean Way is home to only 500 people. These small human populations live alongside nature in a manner that is long-forgotten throughout the rest of the UK. Have you ever seen a street-sign warning you of otters crossing the road, for instance?

The Outer Hebrides can be buffeted by Atlantic storms and still contain the scars from the last Ice Age, where glaciers gouged chunks of land away and made some islands appear to be more water than land. The Tourism Board describe the landscape as being ‘defined by ice, wind and ceaseless Atlantic pounding.’ This all serves to make the Hebrides the perfect place to marvel at the unfolding drama and power of nature.

And yet, simultaneously, there is something remarkable about the resilience of those who live here. The local people are a hardy bunch, and so are the healthy populations of wildlife, birdlife and sealife that calls the islands home. During summer, you’ll discover dazzling meadows resplendent with wildflowers. Keep your eyes peeled for eagles, orcas and deer. These islands are perfect for the nature-lover!

Islands fascinate me. Because of their isolation, each has developed a unique geography and individual character.  Even between the islands of the Outer Hebrides you’ll discover astounding diversity which creates a thrilling cycling journey. No two days will be the same.

On South and North Uist, for example, you’ll largely find a unique environment known as a machair – a flat and fertile lowland – on the island of Harris you’ll gaze up at soaring 700-metre mountain peaks. One day, you might sink barefoot into blinding-white beaches composed of crushed shells and the next, you’ll watch waves crashing against a rugged and rocky coastline. You’ll even discover differences between the exposed south-western coastlines and the sheltered north-eastern coastlines.

The Outer Hebrides are formed from Lewisian Gneiss which, at 2.6 billion years old, is one of the world’s oldest rocks. It’s staggering to consider these rocks have been around for nearly two-thirds of the Earth’s history. It is a metamorphic rock, formed through volcanic heat and extreme pressure.

On the Isle of Lewis, you’ll find the Calanais Standing Stones which, at 5,000 years old, are older than Stonehenge. The megaliths, which are open year-round and free to visit, are one of Scotland’s best-preserved Neolithic monuments. Evidence suggests ritual and ceremony was conducted here for 2,000 years. It’s not known why, so feel free to formulate your own theory, or simply consider the astonishing history of these islands.

There is also evidence of a more recent history. Our first ferry to the Hebrides arrives to the natural port of Castlebay, which sits under the imposing glare of Kisimul Castle. Since 2001, the castle has been rented to Historic Scotland on a thousand year lease for the annual rent of £1 and a bottle of whisky.

The roads of the Outer Hebrides are quiet and see few cars, making it a safe and peaceful place to cycle. It’s one of the reasons Lonely Planet included it in their list of ‘Epic Rides of the World’. Regardless, the pace of life in the Hebrides is slow so any cars you do meet will be content to wait, rather than squeeze through a small gap or around a blind corner.

It’s the wind-swept and rugged Atlantic that makes cycling in the Hebrides so dramatic, so while there are some large hills (mostly on Harris), the cycling route remains mostly flat.

The Hebrides enjoys long summer days where you can cycle late into the evening (or enjoy dinner and a beer as the sun sets). Budding photographers will relish the golden hour, which invariably lasts more like two or three hours! For our July departure, the sun will rise at 04:49AM and set at 22:12PM, creating days that are a whopping 17 hours and 23 minutes long!

The islands of the Hebrides are renowned as a destination where visitors can expect to find fresh, locally-sourced and sustainable food and drink on every island. This is partly due to the traditional practice of Crofting, which is a form of land ownership which lends itself to small-scale food production. Individuals typically own between 2-5 hectares of farmland.

The close proximity of The Atlantic Larder also leads to an abundance of delicious seafood. Be sure to sample the fantastic Hebridean Salmon, hand-dived scallops, and the crab and lobster. After a day’s cycling, there’s a good chance you’ll have seen the very fisherman who headed out to get your Catch of the Day! On the Cycle Britian cycling our the team cook on the beach using locally sources ingredients from the area.

The Hebrides has many local experts and the Hebridean Baker Coinneach Macloed has published a fantastic book that be bought from amazon or at this website. Also famous throughout the Hebrides are smokehouses, who smoke seafood with traditional peat fires and often cured their delights with local whisky. Smoked salmon and Stornoway Kippers are two of my personal favourites! Cycle Britian have made great contacts with the very best places on the Hebrides and out guides will be able to show you hiddeen gems of the Hebrides.

If a tipple is more your thing, four distilleries and a brewery all utilise the pure spring-waters of the Outer Hebrides to produce delight gins, whiskeys and craft beers.

While this isolated archipelago is slower-paced and may feel like the end of the world, that’s not to say you can’t still find comfortable accommodation! We have arranged six nights of fabulous hotel accommodation for our Hebridean Way tours.

The Harris Hotel was built by the 7th Earl of Dunmore in 1865. It has now been family-owned for over 100 years, which has allowed them to develop plenty of experience of offering traditional island hospitality. The Hotel is located in Tarbert, Harris at the end of the ‘Golden Road’. Situated on a spit of land between East and West Loch Tarbert, it is an ideal location to explore the scenic beauty of Harris. Consequently, we stay here two nights, using it as a base for one of our loop rides.

Established in 1863, Lochmaddy Hotel is the oldest on North Uist. It is a true family-run business and there is a very welcoming feel. The team have fantastic local knowledge and are happy to share fishing tips, Gaelic phrases or local history. Recently refurbished, the hotel promises a comfortable stay and a delicious evening meal at the end of day three!

Our Hebridean Explorer package is fully-supported by guides who are qualified by British Cycling as Level Two Ride Leaders. More important than a formal certificate, however, they are passionate about travelling by bike, particularly in Britain!

They will accompany you throughout, providing cycling tips, and sharing their detailed knowledge of the islands’ history, nature and culture. With Cycle Britain, you’ll discover things you’d otherwise miss!

Our tours are also joined by our support vehicle, The Alex Wagon, which will carry your bags to the hotel and become a pop-up café providing nutritious lunches and snacks. On the fifth day where we cycle a loop around Harris, your lunch will be prepared on an Indian Kadai on the beach.

We’re not at all sorry about adding 77 miles to your Hebridean Way adventure. We believe there is so much that you simply can’t miss out on and have consequently added two days to our itinerary and developed loop rides around the Isles of Barra and Harris. These rides take in the picturesque sights and stunning roads that the official Hebridean Way Cycle Route misses.

Trip of a Lifetime

We recognise that while cycling is the shared passion that unites us, our tours should be about so much more. In our effort to create a truly unforgettable experience, our package includes four picturesque ferry journeys which reveal stunning coastal panoramas, an Indian Kadai on the beach and a final evening banquet in Stornoway that celebrates your adventure and new friendships.

If you’re interested and want to find out a little more about this tour, call us on 01925 564281 or drop us an email at hello@cyclebritain.co.uk -We can answer any questions you might have.  Our July trip is full but check out our dates for October and 2022– but be quick, they’re going fast.  With current uncertainty around international travel, there’s never been a better time to take a cycle tour with Cycle Britain.

We’re inviting you to join us today and be part of our community.

We’ve been exploring Britain on our bikes for over 40 years, and we want to share our knowledge and passion. Be ahead of the pack and sign up today to receive the latest news and tour offers.