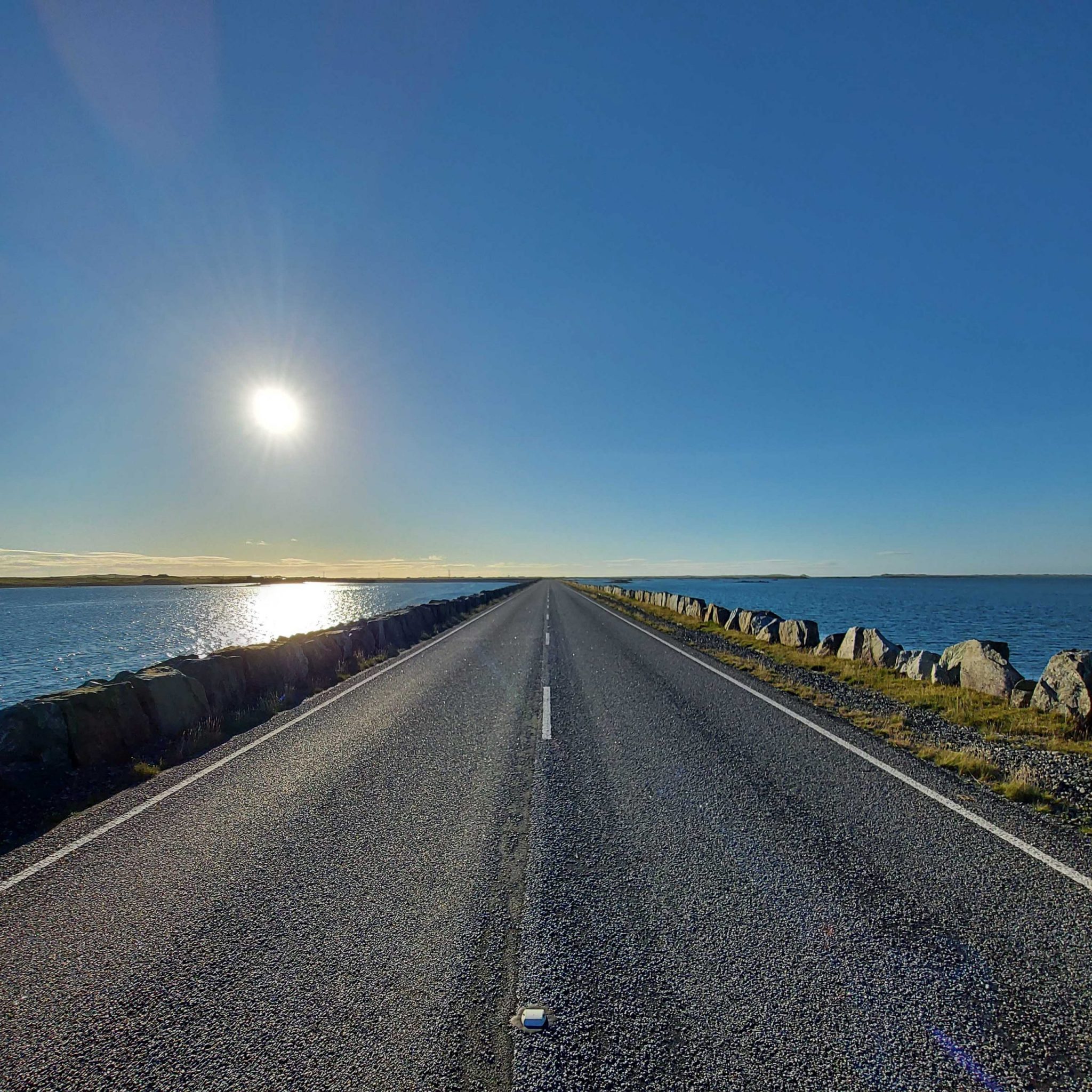 The Hebridean Way twists and turns across ten islands of the Outer Hebrides. You’ll cross between them on causeways and ferries. The route is recognised by Lonely Planet as one of the ‘Epic Rides of the World’ and we at Cycle Britain agree!

To cycle in the Hebrides is to return to a quieter pace of life. You’ll pedal along lonely roads past white beaches and sunsets that melt into the turquoise sea, past lofty 800-metre mountains and through fertile grassy plains – or machairs to give the Gaelic word for one of Europe’s rarest habitats.

Each island is unique but together they form the beautiful mosaic of the Outer Hebrides. This wild archipelago, constantly buffeted by the Atlantic Ocean, supports a hardy collection of flowers, wildlife, birdlife and human-life! This trip squeezes 240 miles cycling, four ferries, ten islands, and a whole lot of adventure into just six days!

Cycle Britain tours offer the best customer experience. This means we always go the extra mile, whether it’s our daily bike-wash policy, pre-tour presentation or celebratory banquet in Stornoway. Every decision is made to create an experience you will remember and treasure forever.

This tour is fully-supported. Ride in a maximum group size of 12 and enjoy the support of our expert team of guides, support staff and drivers who’ll carry your bags, distribute snacks, help with repairs and lead you along the route while sharing stories that bring each day’s riding to life! We also provide the GPX files for those adventurous souls who wish to navigate or travel at their own pace.

We provide 6 nights of high-quality accommodation. We book private rooms to guarantee optimum rest and recovery, however, room-sharing option is available.

Summary of the Tour.

This cycle tour offers an exciting opportunity to visit ten different islands, each unique yet together forming a mosaic of the Outer Hebrides.

The adventure begins on the Scottish Mainland in Oban, known as the ‘Gateway to the Isles’. Stepping off the ferry in Barra after six hours of sailing, you will discover you have returned to a simpler time with a slower pace of life. As you will learn, things are different in the Hebrides.

Our journey begins from Vatersay which is the archipelago’s most southerly inhabited island. From here, we head north. The journey will pass white beaches lapped by turquoise waters that would appear more appropriate in the Tropics. You’ll ride through Machairs [fertile, low-lying grassy plains] and lochs and lochans that were engraved into the islands during the last Ice Age.

Keep your eyes peeled, and you might spot Eriskay Ponies, seals, or flocks of migratory birds that call these islands home throughout the summer.

The islands have a rich history. Some of it is ancient, such as the 5,000 years-old Calanais Standing Stones, and some of it is more recent, such as the 1897 poetically-named ‘Golden Road to Tarbert’, or the sinking of the S.S Politican, a cargo ship, in 1941.

Further north, the machairs give way to lofty 800-metre mountains and a rugged lunar landscape. These mountains are formed from Lewisian Gneiss, one of the world’s oldest rocks.

The Butt of Lewis forms a dramatic finish line to the adventure. Here, Atlantic waves crash against exposed rock under the stern gaze of a sentinel lighthouse. We celebrate in Stornoway with an evening banquet reminiscing the last week’s adventures, before returning to Oban the following morning.

All our routes are available to our Komoot followers.  Follow Cycle Britain on Komoot.

We love to conclude our trips with a celebratory meal on the final evening.

The Alex Wagon is the name of the Cycle Britain support vehicle. It is named after our amazing lead support manager, Alex. He's there to help with anything you may need and will track you on your journey to ensure you have the support required.

After a hearty breakfast, the Alex Wagon becomes a pop-up cafe providing nutritious lunches, snacks, and sports drinks throughout your ride.

We are an official partner with komoot and make your route available to you once you have booked so you can check the full details of the tour. We provide GPX and TCX files. These can be transferred onto Garmin and Wahoo. When you attend a tour you will receive all the route notes and our free guide as a PDF. Information is also provided in our navigation notes to read on arrival. With detailed trip notes, komoot mapping and your guide, you can't go far wrong.

Our live tracking allows you to share your journey.

We use Microsoft Teams to help you get to know your team before your departure.

Free use of soft bike bag if needed

Storage bag for your bike if required to take it into your hotel.

We provide a high-quality and professionally-designed Castelli Jersey for your tour.

6 nights accommodation in 3* and 4* hotels and inns. Unless requested otherwise, we book single rooms to ensure the best rest and recovery.

We are available to support your trip and answer any questions.

Accessible as a GPS track on your phone before you even leave. All you need is your phone to use our turn-by-turn navigation.

We carry your bags between hotels so you don’t have to! When you arrive at the hotel your bags will be waiting in your room for you. We also manage your day-bag and ensure it’s available when you need something.

Unrivalled knowledge of cycling in Britain

We pride ourselves on being the experts on cycling in Britain.

To help you prepare for this demanding tour, we provide you with free guides on what to eat, how to train and general bike setup tips.

On Day 5, our support crew will prepare a delicious lunch on an Indian Kadai.

As a special deal for our 19th July 2021 departure, we are pleased to offer free door-to-door transport for any clients coming from the North of England.

A bike and helmet

Please provide your own bike and helmet for this trip. Get in touch if you have any questions regarding whether your equipment is appropriate.

We highly recommend you take out insurance.

Many of our guests head home from Oban, but we are happy to arrange a hotel if you prefer to stay another night.

We prefer to give you flexibility for your dinners. We do, however, include a celebratory banquet on your final evening.

We have chosen the best accommodation options available where we are sure you’ll find warm hospitality and enjoy a comfortable and memorable stay.

For 2021 we have teamed up with the best hotels in the area.  We enjoy two nights in the Harris Hotel and one night in the amazing Loch Maddy Hotel.  We also enjoy accommodation in other carefully selected hotels and guest houses of a high standard.

This tour is suitable for everyone as you can cycle as much or as little of each day as you like.   We have a support vehicle to put your bike into and transport you once you have done enough.  Some of the days involve spending the day exploring and some days are longer for those that want a challenge.  Join us on this inclusive tour and epic journey.

This is a Grade 4 tour, which means it is suitable ‘for those that want a challenge.’ These routes ‘provide a challenge to complete climbs and steep descents’ and involve ’60 – 100 miles per day.’

Leading up to your trip, we would be glad to help with your training program;
– We hold regular Zwift sessions which are a great opportunity to get bike-fit and meet fellow cyclists.
– We provide training weekends in the Peak District led by qualified coaches.
– We can tailor a training plan to your fitness, requirements and schedule.
For any of these training plans, check out our coaching packages or contact us.

For a different challenge altogether, check out our popular North Coast 500 Road Tour or our LEJOG 9-day Road Tour.

Do you cater to vegan and vegetarian diets?

Absolutely! Inform us in advance of any dietary requirements and we will be glad to cater to you.

Will we be able to wash our clothes on the trip?

There will be opportunities to wash clothes and leaders can take your items to a launderette.

Can I charge my phone?

We have a charging station in the support van.

What level of fitness do I need?

This tour is suitable for everyone as you can cycle as much or as little of each day as you like. We have a support vehicle to put your bike into and transport you once you have done enough. Some of the days involve spending the day exploring and some days are longer for those that want a challenge. Join us on this inclusive tour and epic journey. Overall this is a Grade 4 tour, which means it is suitable for ‘for those that want a challenge.’ These routes ‘provide a challenge to complete climbs and steep descents’ and involve ’60 – 100 miles per day.’ Check out our coaching section for more info. The tour allows time to balance enjoyable days mixed with challenging days.

What level of ability do I need?

A high level of ability and experience is required for steep ground and long descents.

What level of support is offered?

This trip has full vehicle support meaning everything you need is taken care of. We provide breakfasts, lunches and snacks and can offer advice on nutrition, equipment, preparation and training. We provide detailed route notes and GPX files.